India has always been a land of colors with a plethora of art forms! Owing to the vast expanse of its land that covers or unites different tribes and cultures, India always has a lot to offer in the field of Art and Craft. Let’s take a plunge into Indian art with my small tribute to my colorful country on its 68th Republic Day!

It’s the beauty and varied flavors of Indian Art that has always inspired artists around the world! With people around taking so much interest in whatever Indian Art has to offer, the Hobby Ideas Team at Pidilite has come up with a beautiful Adult Coloring Book based on the theme Traditional Art Forms. The Adult Coloring Book kit comes with a coloring book for adults with 40 perforated design sheets and 10 glitter gel pens. The book has beautiful, intricate designs and speaks about 9 beautiful Traditional Indian Art Forms. In this blog post on Indian Art Forms, I would be writing about the art forms that are a part of this book.

I was so thrilled when I picked up this book to work on that I thought of working on the design sheets by following the actual style of these traditional art forms. I picked up a set of Rangeela Tempera colours to start off with my project on these nine art forms. Rangeela Tempera Colours have a matte finish and more or less have an earthy and natural feel which is why I thought they would work best to emulate these Indian Art Forms which originally use naturally derived colors such as vegetable dyes. 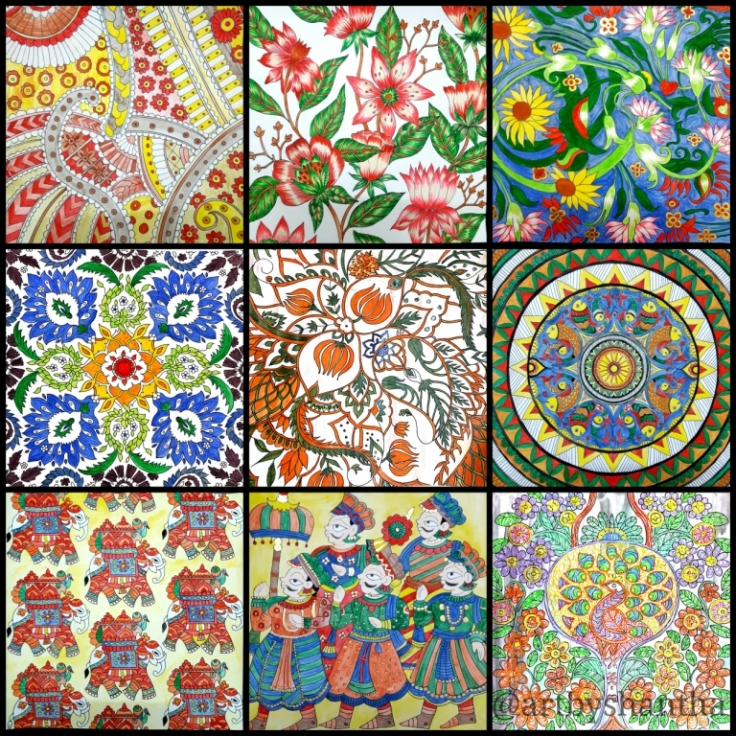 The book takes inspiration from 9 different Indian art forms which are listed below:

Originating from beautiful valleys of Kashmir in the Northern part of India, which is known for it’s natural beauty, “Kashidakari” is the traditional name given to Kashmiri embroidery. Kashmiri embroidery is known all over the world for its beauty and intricate designs which are mainly inspired the beauty of nature- birds, flowers and fruits.

I use the Tiranga/ The Indian Tricolor to fill up this sheet on the Kashmiri Art Form. This one was specially painted today. My little activity for Republic Day.

The word “Chintz” has been derived form the Hindustani word “chint”, which has also been derived from the word “chitra” which is a Sanskrit term for spotted or bright. The art form Chintz mainly involves hand painting or block printing of plain weave cotton fabrics with brilliantly colored patterns of plants and animals. In the 17th century, these prints were majorly exported to Europe and America where these were used for tapestry.

I filled up my Chintz design sheet with the brightest and most contrasting colors from the Rangeela Tempera Kit. Here’s the output.

Again, to paint my design sheet, I have used Rangeela Tempera Colors. But owing to the richness of color in the Kolam Designs, I have used the 7 rainbow colors to paint this one.

The artwork on Leather puppets has been taken and inspired form the shadow puppet theatre tradition or the “Tholu Bommalata” from the state of Andhra Pradesh in India. These designs are derived from the various motifs used to make the leather puppets.  The term “Tholu Bommalatta” refers to the dance of leather puppets. This Puppetry involves a performance which is done by a group of performers who are mainly wandering entertainers and peddlers.

To add color to my sheet on Leather Puppets, I have used dull and earthy shades which are  the colors which are used in the actual art.

Madhubani is an artform and a unique style of painting which is practiced in the Mithila region of Bihar. The patterns in Madhubani are characterized by their very pronounced geometrical patterns and they predominantly depict auspicious festivals and occasions and take inspiration from nature. The striking characteristic of these paintings are the lines which are used to fill up the design. The designs are painted with fingers, twigs, brushes, nib pens and matchsticks using natural dyes and pigments.

The paintings are generally vibrant and use the basic primary colours- red, blue and yellow, Secondary colors- orange and green, brown and black. I have used the same colors from the Rangeela Tempera Colors Kit for this project. The kit has red, blue, yellow, green, brown and black. I made the orange by mixing a certain quantity of yellow with a small portion of red.

Phad Painting hails from the Bhilwara District in the colourful state of Rajasthan. The main theme of these paintings are to depict local deities or rulers and their legends or stories. The Phad is mainly a Scroll Painting which is carried from place to place by traditional singers, who narrate eulogies based on the theme depicted in the scrolls. The main characteristic of a Phad Painting is that the characters in the painting face each other and not the person who is viewing it.

The Phad Painting is generally done on fabric where the outline of the paintings are first drawn in black and later filled with natural colors. The Phad painting again follows a similar color rule as Madhubani.

The word Rogan is derived from a Persian word which means “Oil-based”.Rogan Painting is a kind of Fabric Painting which is practiced in the Kutch District of Gujarat. The art form is very distinguishable by it’s geometric and floral designs that have a strong Persian influence. Rogan art involves painting on cloth with a bright, thick paste using bright colors where Yellow, Blue and Red are the most commonly used colors in the art form.

In order to try emulating the art form, I used Fevicryl 3D outliner cones to fill up the Rogan Art design sheet.

Sanganeri block printing hails from a place by the name Sanganer, a place in Rajasthan which is famous for its block printing. The Sanganeri style of printing mainly involves small motifs inspired from nature which include- flowers, sunflowers, roses and luxuriant foliage such as the rudrakshas. The Sanganeri Block Print gained very high popularity in the 16th and 17th century in European countries when it was one of the major exports of the East India Company.

These block prints mainly involve printing on cotton fabric using wooden blocks.I spent my time with this design by randomly filling it in order to make it very colorful.

Thangka paintings are huge Buddhist Murals which are had painted on fabrics of silk and are generally found hung across the ceilings in Buddhist monasteries. The paintings usually depict teachings and talk about the way of life in the form of mandalas or narratives and educate about the good and the bad through figure drawings.

The Thangka paintings are very colorful and I tried painting this Thangka Painting Design Sheet with all possible colors.

That’s about the 9 Indian Art Forms! There are a lot more designs in the book and to check those out, you can pick the book here:

One thought on “INDIA IN COLOUR- REPUBLIC DAY”