Art is a way of expression, a sort of channel for an artist to express what is perceived within. Artists take inspiration for their creations from Nature, surroundings and existing art forms. Art has existed and prevailed since time immemorial. Though art has evolved and revamped itself to suit the changing likes and tastes of new trends, it is an undeniable fact that ancient art still seems to inspire and awe art lovers of today.

It was a wonder moment for me at the ancient Annamalaiyar Temple while on a road trip to Pondicherry. We decided to hop in and have a look at the Temple as it we would pass by the place. A nice peaceful drive through a line of beautiful villages: lush green on both sides, simple village scenes, lotus ponds, grazing animals, etc, we reached the majestic temple that was tucked away in the busy town of Thiruvannamalai.

Ancient Indian architecture is all about spell-binding sculptures carved out of stone with skillful craftsmanship. The sculptures are generally of celestial figures and depict certain sections or stories of Hindu Mythology. Each sculpture has a story to say.

An interesting fact about religious structures and figurines is that the sculptors work on a single stone and carve out each and every detail of the God/Goddess that they have in mind. Utmost care is to be taken to get the exact features of the face with perfect proportion. If while working, there happens to be a crack or a portion of the sculpture chips off, the entire piece is discarded and the sculptor starts working on another stone right from scratch. It is with such dedication that ancient Temples in India have been erected. 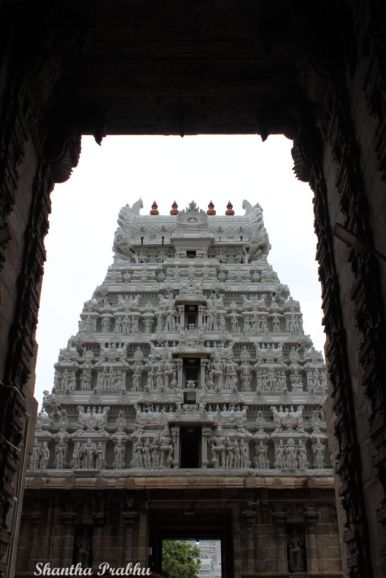 The insides of the temple have this blast of colour that would be the perfect source of inspiration for a muralist!! The layers of relief and carvings is such a breathtaking and splendid feast for the eyes! Have a look at this varied colour palette…

Awestruck by the artistic beauty of the Annamalaiyar Temple, I ended up with a quick,rough pencil sketch in my travel journal, of one of my clicks. 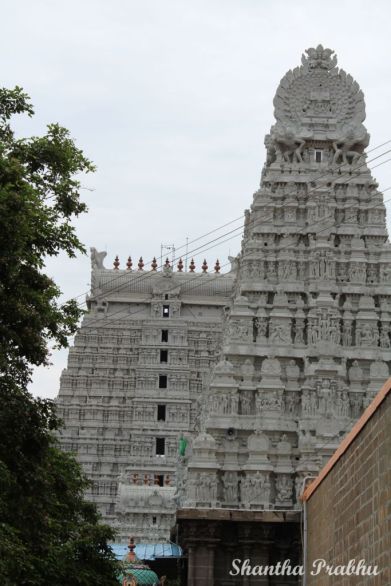 The world is a canvas. You just have to look around for inspiration. Do you have any such “Travel Inspires Art” stories? Do let me know. I would love to hear from you.