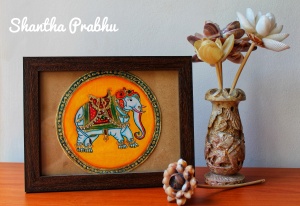 Ganjifa Cards were introduced to India with the Persian invasion around the 16th century. The game of Ganjifa was a simple cards game which was played with the most precious cards you can ever imagine. These cards were made either out of ivory or marble and were engrave, etched and laid with the most precious of Persian gemstones such as the Agate, Porphyry, Onyx and Jade! The term Ganjifa is derived from the Persian word Ganj which mean treasure, and the game played by the Persian rulers was basically a gamble for each others treasury.

As the Persian rulers went on annexing kingdom after kingdom, the game spread to many places in India. The kings back then were great patrons of art and wished to have a personal deck hand painted for themselves and slowly the art form: Ganjifa Art evolved. The Hindu rulers introduced mythological characters from the Hindu scriptures in their personal deck and that is how we have the Dasha Avtara, Ashta Lakshmi, Krishna Leela and Rama Leela set of Ganjifa Cards. The art form followed the Sawantwadi style in Maharashtra, Navadurga Ganjifa in Odisha, Bishnupur Ganjifa in West Bengal and Mysuru Ganjifa in Karnataka. The art form went under varied local influences, for example, the Mysuru Ganjifa takes a lot of characteristics from the Mysore style of painting: Hindu mythological characters, use of thin gold leaf and barely any usage of stones.

As the game was adopted by various households, the cards were made using leather, wood and finally cloth, to make it more affordable to the common man.

With the British invasion and the introduction of their own set of affordable paper cards, the usage of Ganjifa cards reduced. Its is also a fact that heavy taxes were levied on those who played or painted the Ganjifa cards. Hence, the game of Ganjifa fell like a pack of cards!!

HOW THE GAME IS PLAYED:

The game of Ganjifa is played just like how we play the game BANK today.

One can explore a bygone era by painting a card in the Ganjifa style of art.

The art involves a combination of various painting techniques like:

Here is my set of 4 hand painted Ganjifa Cards:

The game of cards now has individual pieces sold as an art form which can be used to adorn a corner of your home.

I have had a couple of workshops to teach Ganjifa Art in Bangalore and have bee featured on print media for the same:

Drop me a message if you wish to connect with me to learn this beautiful art form.